A mouthpiece for Hungary’s government leveled an antisemitic attack on Antony Blinken. Here’s why it matters.

IRA N. FORMAN MAY 27, 2021
(JTA) — It has been a traumatic time for world Jewry. If violence in Gaza and Israel were not bad enough, the fallout from the conflict has spurred physical attacks on Jews, vandalism and antisemitic rhetoric. The antisemitism this time has not been perpetrated by neo-Nazis and white nationalists but by elements of the left and pro-Palestinian protesters. -- Read More.

The working definition of anti-Semitism needs no rewrite.

The definition does not curb speech or equate anti-Zionism with anti-Semitism, it offers guidelines to help understand where speech crosses a line.
Since 2005, government and non-profit professionals tasked with combating anti-Semitism have championed the widespread recognition of the International Holocaust Remembrance Alliance (IHRA) Working Definition of Anti-Semitism. Prior to 2017, the IHRA Working Definition was largely uncontroversial in the United States except among pro-Palestinian activists and a few voices on the extreme left. However, during President Donald Trump’s term in office, the definition became more of a target for criticism. In the last few weeks, two alternative definitions have been proposed that seek to modify or replace IHRA. Read More.

Combatting antisemitism: Why the world needs to adopt the IHRA definition.


The virus that is antisemitism has mutated into a particular form where antisemitism is employed in discourse around Israel.


By IRA FORMAN
OCTOBER 10, 2020
Antisemitism is a complex, shape-shifting phenomenon. There are no easy solutions, no silver bullets that can counter all of today’s manifestations of antisemitism. However, the International Holocaust Alliance’s (IHRA) working definition of antisemitism is one critical tool that should be employed against some types of this persistent evil. Read More

Poland has an anti-Semitism problem. Here’s how the Trump administration could help fight it.

IRA N. FORMAN JULY 21, 2020
WASHINGTON  (JTA) — During my four years as the State Department’s Special Envoy to Monitor and Combat Anti-Semitism, I was exposed on numerous occasions to one of the great truisms of the past few centuries of Jew-hatred. There are two forms of evils that are frequently, inextricably linked— anti-Semitism and authoritarianism. Read More

WASHINGTON – The House Foreign Affairs Subcommittee on Europe held hearings today on how people and governments in North America and Europe can play a greater role in resisting rising antisemitism and xenophobia in European countries. As incidents of antisemitism and xenophobia rise in both regions, Human Rights First Senior Advisor for Combating Antisemitism Ira Forman testified to the seriousness of the threat to Jews and modern democratic societies. -- Read More

Hungary Must Reverse Its Support of Memorial to Antisemitic Politician

The Hungarian government should promptly reverse its support for a memorial in the city of Vác to Gyula Kornis, a leading antisemitic politician from the interwar period. -- Read More


Corbyn’s Labour Party is a warning to the American left.

BY IRA N. FORMANMay 23, 2019 in Featured, Jewish World, Opinion, Politics, Summer 2019 Double Issue
The majority of extremist murders in the United States in recent years—including recent attacks on synagogues—have been the work of white nationalists, motivated by the violent conspiracy theories emanating from the extreme right. It’s not surprising, then, that many on the left view anti-Semitism in America as exclusively a problem of the right. When confronted with disparaging remarks about Jews from people of the left, these individuals often resort to one of two excuses: first, that these leftist bigots are powerless and therefore irrelevant to any discussion of anti-Semitism; second, that individuals associated with the anti-racist left can’t, by definition, be anti-Semitic. -- Read More
________________________________________________

IF YOU ONLY DENOUNCE ANTI-SEMITISM WHEN POLITICALLY CONVENIENT, YOU'RE PART OF THE PROBLEM | OPINION

"Stop denouncing anti-Semitism!" This may seem an incongruous thing to say, particularly for those of us who have long asked elected officials to speak out and denounce bias and violence against Jews. In the wake of recent rhetoric, however, this suggestion is entirely appropriate. Sometimes such denunciations are actually detrimental to the fight against anti-Semitism.
-- Read More 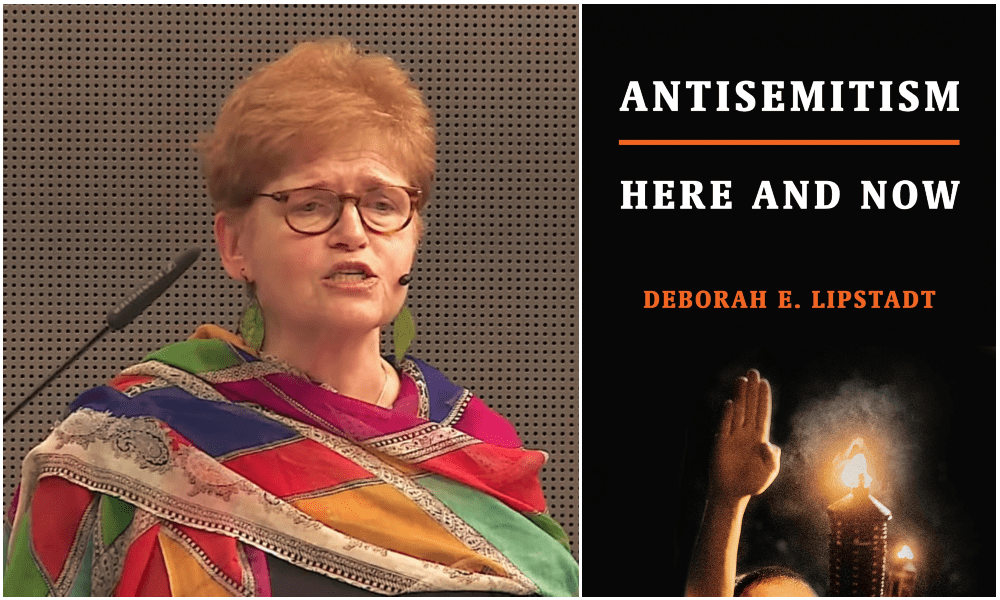 Not many people can match the depth of her immersion, but one who can is Moment Institute Fellow Ira Forman, who was the U.S. State Department’s Special Envoy for Monitoring and Combating Anti-Semitism from 2013 until 2017. Forman now teaches the subject as a visiting professor of contemporary anti-Semitism at Georgetown University; he’s also a senior fellow at Georgetown’s Center for Jewish Civilization, the senior advisor for combatting anti-Semitism at Human Rights First. He also manages the Anti-Semitism Monitor. When these two experts sat down to talk shop, it wasn’t just another interview. -- Read More

Responding to: Is Anti-Semitism a Problem in International Affairs?

Few dispute the assertion that we live in a period of growing anti-Semitism. The most contentious issue surrounding that growth is the question of whether criticism of Israel is anti-Semitic. The answer to this heated debate is surprisingly simple. Yes, anti-Israel criticism can be anti-Semitic.--Read More

Last week’s cover of the Hungarian business magazine Figyelő featured András Heisler, head of the Federation of Hungarian Jewish Communities. The problem? Paper money—20,000 forint bills—floated around and over the picture of Heisler, with one appearing to protrude from his forehead.-- Read More

Why is the Hungarian Government Promoting a New, Ahistorical Holocaust Museum Designed by a Holocaust Distorter?

The history of the Holocaust is a painful and tragic story in all the countries of occupied Europe. Hungary is no exception. Yet the current Hungarian government seeks to rewrite history and appears determined to ignore any substantial Hungarian responsibility for the treatment of its Jewish residents in the 1930s and 1940s. -- Read More

Statement on the 80th Anniversary of Kristallnacht, the Night of Broken Glass

Eighty years ago tonight, German citizens and paramilitary thugs attacked their neighbors because they were Jews. In the midst of the pogrom, an unknown number of Jews were killed, and nearly 30,000 were detained and sent to concentration camps. Many more committed suicide in the following days. Nazis and their sympathizers also destroyed property—homes, stores, and synagogues.

For more information or to speak with Forman, contact Christopher Plummer at [email protected] or 202-370-3310

Washington, D.C.—Human Rights First today announced that Ira Forman, former U.S. special envoy to monitor and combat anti-semitism, has joined Human Rights First as senior advisor for combating antisemitism. He will lead the organization’s efforts to expose and counteract antisemitism at home and abroad in keeping with a U.S. foreign policy rooted in a strong commitment to human rights, universal values, and American ideals. -- Read More

The Danger of Polarizing Anti-Semitism

Anti-Semitism is back. In the United States alone, the Anti-Defamation League (ADL) study on anti-Semitic incidents in 2017 showed a 57 percent increase over the 2016 numbers. In France in March, an elderly Jewish Holocaust survivor was murdered and set afire in her own home, apparently by an acquaintance with anti-Semitic motives. The issue cannot be ignored, but there is an added danger that makes dealing with it more difficult: Today, politicians and ideologues on opposite sides of the political spectrum who might normally come together to fight anti-Semitism are instead using the issue to bash their opponents. Instead of denouncing anti-Semitic incidents, too many simply use them to further their agendas. This trend is dangerous. It must stop. -- Read More

Anti-Semitic acts of violence have increased substantially abroad and in the United States this year, but a State Department role that addresses these issues, the Special Envoy to Monitor and Combat Anti-Semitism, has remained vacant for 15 months despite calls from Congress and Jewish rights leaders to fill it. -- Read More

Trump Administration: Combating Anti-Semitism A ‘Priority,’ But No Envoy Named

Responding to Is Anti-Semitism a Problem in International Affairs?

Few dispute the assertion that we live in a period of growing anti-Semitism. The most contentious issue surrounding that growth is the question of whether criticism of Israel is anti-Semitic. The answer to this heated debate is surprisingly simple. Yes, anti-Israel criticism can be anti-Semitic. --  Read More.

The Rising Tide of Anti-Semitism

From Nazis marching in Charlottesville to attacks on Jews in the streets of Europe, anti-Semitism persists around the world. In this week's AJC Passport, we talked with Ira Forman, the former Special Envoy to Monitor and Combat Anti-Semitism at the U.S. State Department, about the international trends in anti-Semitic attitudes. -- Podcast.

“This is no time for complacency,” Ira Forman says.

BY IRA FORMAN September 5, 2017, 7:32 pm
As someone who spent the last four years following international anti-Semitism as the State Department’s special envoy to monitor and combat anti-Semitism, and who believes that 21st-century America has been largely immune to this disease, the neo-

Since the beginning of the Trump administration, the State Department post of special envoy to monitor and combat anti-Semitism has remained vacant. Judging by recent remarks from Secretary of State Rex Tillerson, the administration is still vacillating on whether it is important enough — or enough of a priority — to continue the office. -- Read More

WASHINGTON — Two former US special envoys to monitor and combat anti-Semitism warned Monday of the consequences of the Trump administration’s refusal to fill that post, saying it would be “tragic” and a “terrible loss.” -- Read More

State Dept.’s Anti-Semitism Monitoring Office to be Unstaffed as of July 1

WASHINGTON (JTA) — The U.S. State Department’s office to monitor and combat anti-Semitism will be unstaffed as of July 1. A source familiar with the office’s workings told JTA that its remaining two staffers, each working half-time or less, would be reassigned as of that date. -- Read More

Fifty Years On: Anti-Israel Or Antisemitic?

The 50th anniversary of the Six Day War is generating reams of commentary on both Israel’s swift victory and the ongoing failure of the Israeli-Palestinian peace process. A reexamination of the events around the 1967 war also clarifies the nature of 21st century antisemitism. -- Read More

Antisemitism is not only a Jewish problem; Jew-hatred – like other forms of religious and ethnic prejudice – is a threat to the very foundations of liberal democracies. -- Read More

Former US Special Envoy on Antisemitism 'Surprised' By JCC Perpetrator

WASHINGTON – The revelation that an 18-year-old Jewish Israeli is likely responsible for a spate of bomb threats to Jewish community centers is “surprising,” Ira Forman, who served as US special envoy to monitor and combat antisemitism during the Obama administration, told The Jerusalem Post on Thursday. -- Read More

How Our Jewish Organizations Combat Anti-Semitism

It’s been two months since I left my position at the U.S. State Department as the special envoy to monitor and combat anti-Semitism (SEAS). I didn’t come away, after 44 months, with any grand theory on anti-Semitism, nor do I have any silver bullet answers to the problem. I do, however, have a number of strongly held conclusions on the tools we must utilize to combat this evil. -- Read More

How The State Department Is Combating Anti-Semitism

BY MARK WEITZMAN
September 6, 2016, 2:44 pm
The end of any presidential term is an appropriate time for assessment and analysis. One of the major issues that we Jews continue to be concerned about is the current state of anti-Semitism, which has surged to unprecedented post-World War II levels. This leads to the frequently asked question: Beyond private organizations and activists who struggle with today’s manifestations of history’s oldest hate, what exactly is the U.S. government doing to combat anti-Semitism?  -- Read More

By Andy Gotlieb
May 11, 2016
The nation’s Special Envoy to Monitor and Combat Anti-Semitism addresses the state of anti-Semitism worldwide. -- Read More
Do you like this page?
Tweet